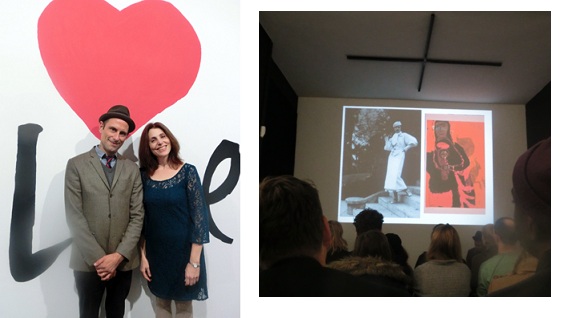 Curators Aaron Rose and Sasha Carerra at the Circle Culture Gallery exhibition opening in Berlin (right) and an unusually fashionable Corita, before she donned the nun’s habit, shown during the curators’ opening talk.

She was a pop-artist, a rebel, a catholic nun and even a Jungian buddhist. Sister Corita (1918-1986) was an artist who was one of the first to experiment with pop-art. Rumour has it she even inspired Andy Warhol to turn his Campbell Soup paintings (which never sold when he was alive) into the iconic Campbell Soup silkscreen prints. Both her life and her art are marked by a fusing of contradictory elements. She put texts from existentialist philosophers, as well as the lyrics of Yellow Submarine to lines from the Bible into her multi-layered works, which are a feast for aficionados of graphic experiments.

An exhibition of her work, which also includes lesser-known early and late period art, opened last Saturday at Circle Culture Gallery in Berlin. Curators Aaron Rose (also a filmmaker) and Sasha Carrera (director of the CoritaArtCenter) had flown in especially from LA. They gave a talk discussing Corita’s fascinating, often complicated life to the captivated audience. Afterwards, we were able to look at Aaron Rose’s film on Corita, Become a Microscope which is played throughout the run of the exhibition. It features rare footage from the 1960s, candy-coloured images from Coritas inspired, hippy-looking students contrasting with the nuns in their stark black-and-white habits.

Aaron Rose projected two iconic works by Corita straight onto one of Circle Gallery’s enormous white walls and turned them into over-sized murals. All of this is guaranteed to put you in a creative mode, and the curators have provided an outlet for that as well. A part of the show has been turned into a workshop, with lots of enticing materials, where anyone can create Corita-style artworks. We could not resist getting to work right away.