What has been a scandal in Bratislava was from 8-31 October 2016 on display in Berlin. Artistic reflections about the fear of refugees, the dread of the unknown and the raise of xenophobia, racism and populism in Europe are the center stage of the exhibition “Mirror of Alterity” curated by Juraj Čarný. Eight artists and two artist collectives from Czech Republic, Slovak Republic, Rumania and Germany addressed this issue.

The exhibition at Galerie Kunstpunkt in Berlin shows a selection of participatory artworks from the exhibition “Fear of the Unknown” shown earlier this year at Kunsthalle Bratislava.

We interviewed the participating artists about their artworks, the exhibition and the scandal in Bratislava.

Radovan Čerevka is one of few Slovak artists who is systematically interested in analysis of political events beyond the border of Middle Europe. The current project “Charge” is the documentary cycle in which the drawing documentary records from lawsuits anticipate the result of ongoing legal dispute between Slovakia and the EU. According to Prime Minister of Slovakia Róbert Fico, Slovak Republic refuses to accept the refugee quotas and sues the EU at the European Court of Justice in Luxemburg. Čerevka in his artistic fiction realizes „the spectacular idea“ of Prime Minister to build the wall against refugees around Slovakia which would not be difficult to accomplish with the money gained from winning the court case. 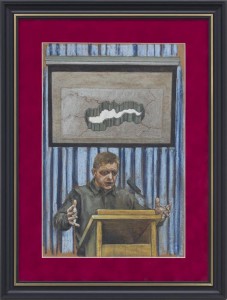 Why did you choose drawing this particular scenario of Slovakia debating against Europe?

Our prime minister Fico knows very well, that he won’t be successfull with his lawsuit for a vote about quotas. This populist adventure is only for his followers, to create the image of a strong political leader, who braces himself against Brussels. At the moment the lawsuit is waiting for its judgement at the European Court of Justice in Luxembourg. My storyboard is pure fiction with an unclear ending. We are only able to suspect that maybe once Slovakia gets used to Ficos practices and is known for saving Slovakia from the Islam.

What was your intention taking part in the exhibition “fear of the unknown”?

With this topic we move on thin ice today. I hesitated for a while before taking part in the exhibition in Bratislava. On the one hand I didn´t have personal experience with refugees and didn´t want to present a pseudo-humanistic cliché. Furthermore despite my humanistic belief I am sceptical about plans to integrate big masses of migrants in a short time.  My connection to the topic of the exhibition  is more, what I was honestly angry about, the misuse of the events by the politicians.

Why did you decide on such a traditional and classical look for your pastel drawings?

A pastel drawing creates a historical tradition to the documentation of lawsuits. In many countries like the US or Czechia this procedure is still used to document lawsuits, because there is a prohibition of Photographing. In my work I am creating a subjective prediction about the events. In this case I can create a future vision by drawing and also be a witness at the same time.

The couple of two artists David Koronczi and Martina Szabóová created the video which displays the simple game from our childhood in which the children draw circles around the ants. Obscure behaviour of the ant being insecure for a while in its new „prison“ tests the limits and possibilities of fictitious border which can be „easy to cross“. It is an eloquent representation of unsolvable situation in which the European culture and incoming refugees appeared. 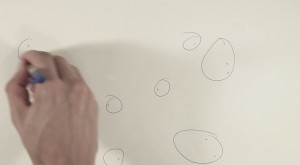 Did you find out why ants act insecure when drawing circles around them?

Yes, it is well known that the ants are sensible to chemical stimulants, informations. They use possitive chemical traces to communicate between each other or to uncover certain food sources. We calle these scents attractants. On the other hand there are materials, and chemicals that are disturbing for the ants, they know that there is something to be worried of. These ones are called repellents. We were researching the ability of breaking the mindset of the unknown, of exceeding the negative chemical information with our video. We were also interested in personality of ants, as you can see each of them reacts a bit differently.

What was your aim by comparing ants acting insecure crossing “surreal borders” to the real situation of refugees standing in front of fences?

The aim was not to compare ants to the human situation, but equaling the reaction of all of the living beings in a situation of facing a “repellent”. Sometimes we act fearfull and stay stoned, but sometimes we cross different borders, physical or mental on the other hand. All of us are migrating all the time, that’s why we choosed so “narrative” title, because as we all know (but use to forget) migration process is not just geopolitical phenomenon. Our aim was to comment this without judging. We consider this work as a gesture dedicated to naturality of moving, migrating.

What is the real world equivalent to your drawn, conquerable borders? Is it also about mind sets?

It is very hard to evaluate something so ambivalent as the bordes are. On one hand they serve a type of safety and freedom (questionable sometimes) for the ones inside and they could be frightening or unconquerable for those outside. It is definitely a question of mindsets and ideology too. Maybe there is a need to update the nation state concept, unfortunately nobody knows how. That’s why we consider this piece as a gesture about moving, migration and naturality, not as a radicaly critical work. We felt a desire to approach it in this naive way, to accelerate our own thinking about this theme.

At the beginning of the first media interest in those days extra-parliamentary party of far-wing leader Marián Kotleba the author expressed his uncompromising attitude to this „leader“ and unexpectedly rising preferencies of the fascists. Kotleba’s „portrait of porcine blood on a cheap paper“ became more up to date three years later in 2016. This year the party represented the fascist attitudes (People’s Party Our Slovakia) made it to parliament for the first time in Slovak history. 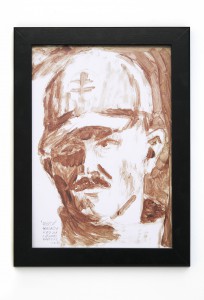 A portrait of Maria Kotleba, the manager of a right wing party. Why did you choose him for your artwork?

In 2013, Marian Kotleba, the leader of the extreme right-wing political party “Naše Slovensko” prevailed in county elections  in Banská Bystrica (central Slovakia) – It was a big shock for me.
In the contemporary democratic society that accept all values and aspects of human rights and freedom, it happened that suddenly in a regional county election won the leader of an extreme right-wing, neo-Nazi party. I felt terrible and from that feeling, civil responsibility and duty I realized as professional artists that I need and must to express myself to this the situation. I think that contemporary art should, beside inner things, reflect topics and phenomenons or problems from social – culture – politics context. In my artwork I work with natural pigments (Familly album 2013 – 2016 coffe on paper), and for this particular work, a portrait, I choose a quite radical medium – pig’s blood.  This work has political aspects and it is politically engaged art, that is not just related to the Marian Kotleba, but speaks more about what Kotleba represents: repression, regression, nationalism, intolerance and other deformations in society that are typical for the extreme right wing retorics and politics. The work is realized in year 2013, intentionally on inexpensive paper, small format and is adjusted in a very cheap black frame.

How was the feedback in Bratislava on a picture of him drawn with pigs blood?

Reactions to my work from the art scene were positive, most of the visitors of the gallery, artist or art theoreticians understood the content of the portrait and its expression.  Through social networks I received some vulgar messages and responds from the supporters of the extreme right wing party of Marian Kotleba. I didn’t exeperienced physical attacks, censorship from the gallery of politicians .

What was your intention taking part in the exhibition “Fear of the unknown”?

I was invited to take part at the mentioned exhibition by the curator, who choose my artwork and included to the exhibition. I was glad to present the portrait “Leader” in framework of this show. Marian Kotleba, leader of neo-nazi party “Naše Slovensko” is very active and radical in the campaign against immigrants and his supporters many times attacked foreigners and spread fear around the country against different cultures.