What has been a scandal in Bratislava is from 8-31 October 2016 on display in Berlin. Artistic reflections about the fear of refugees, the dread of the unknown and the raise of xenophobia, racism and populism in Europe are the center stage of the exhibition “Mirror of Alterity” curated by Juraj Čarný. Eight artists and two artist collectives from Czech Republic, Slovak Republic, Rumania and Germany addressed this issue.

The exhibition at Galerie Kunstpunkt in Berlin shows a selection of participatory artworks from the exhibition “Fear of the Unknown” shown earlier this year at Kunsthalle Bratislava.

We interviewed the participating artists about their artworks, the exhibition and the scandal in Bratislava.

The artwork “Dictionary” of Alena Foustková shows two walls, one attached with “positive” words, the other with “negative” words. The artist invites visitors, by showing little stripes of paper, waiting to be pulled off, to choose from a selection of words. 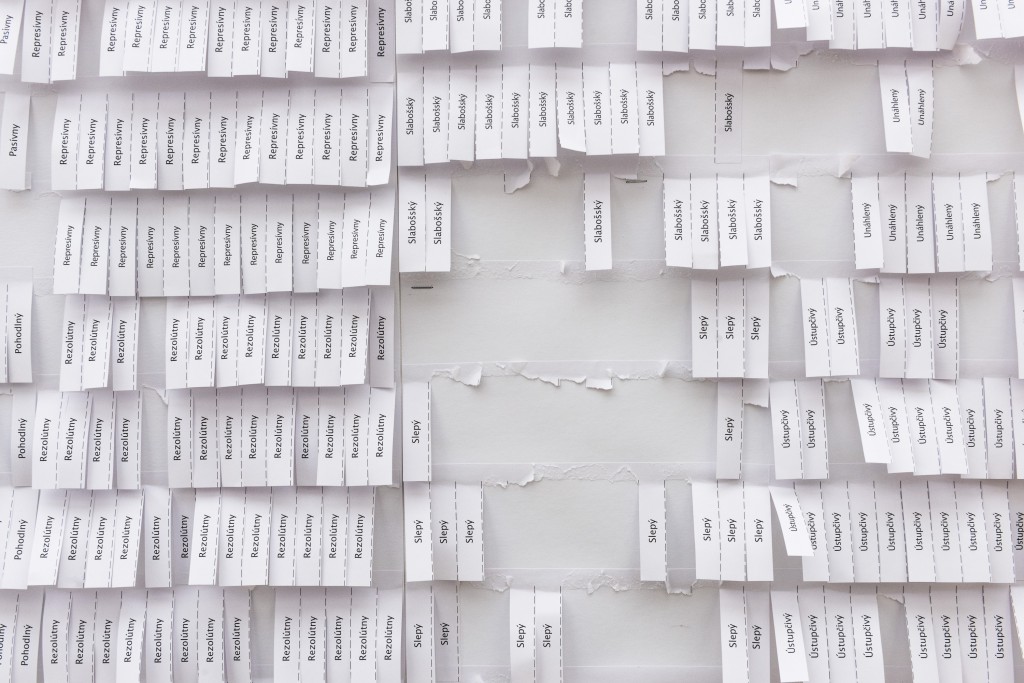 Speaking about your artwork Dictionary: Which three words would you choose and why?

I have been carrying in my wallet one word which fell down from the installation and I picked it up. I guess that it was meant for me. It is the word Egoistic. Perhaps it should remind me that I should be humble and accepting. I guess that artists tend to be a bit egoistic, so it is a reminder for me.

The other word would be Empathetic. I came to Canada as an immigrant in 1985 with my husband. We were very much accepted by the society and the Canadian welcoming attitude influenced us a lot.

A word which I would not like to be is Hysterical. I think that some of the political leaders in the post-communist countries are hysterical for no reason. They spread panic and hatred among people which is not substantiated. I really like the attitude of the Canadian Prime minister Justin Trudeau who behaves as somebody I can look up to. He urged his fellow Canadians to warmly welcome the Syrian refugees. He said “I encourage all Canadians to show them a warm (holiday) welcome in keeping with our values of compassion, kindness, and generosity.”

It seems that in your artwork are two description worlds: one good and one bad. A world of good and bad? Is there a straight cut between?

There is never a straight cut between the good and bad. But we should know clearly which words we agree with and which ones we find disturbing. Some words could be ambiguous, like the word Nationalistic which I placed among the negative words. When viewed as narrow-minded or even closed-minded, being afraid of anything foreign and criticizing anything different, it would not be a positive word in my opinion. I firmly believe that we should build on our traditions and be proud of our Christian heritage. However, perhaps we could be a good example to others of those values which are tolerance, compassion and love.

Another word in-between could be Unyielding. It would be negative in a sense of believing that there is only one right way. Every such stand would be in danger of being dogmatic and not able to hear the other side. Just like the word Accommodating from the positive words could be viewed also as potentially negative for being the opposite of the unyielding.

I see most of the words, however, clearly divided into those which I view strictly as negative or positive.

In Germany words like “nation”, sometimes even the word “German” are badly connoted, other countries handle these more easily. On which side in your artwork would you put these words and how would you reason this?

Nation, in my opinion, does not need to be built purely on the homogenous group pf people who have always lived in that area. In Czech, we have only one word for anybody who comes to live in the country and was not born here. We call them “foreigners”. If they do not speak a perfect Czech, no matter how long they live, assimilate, work and raise their families here, they will still be referred to as foreigners.

Of course, Germany has its historical and painful experience with the words Nation and German. I believe that Germans have learned from their mistakes of the past and hopefully do not fall into the same trap again. I feel great in Berlin for the tangible experience of acceptance, tolerance and cultivated relationships to each other. Many other countries have not overcome their guilt after the Second World War. The injustice or wrong doing were never identified and acknowledged to provide for the reflection needed. Now the racial and ethnic issues have re-surfaced again. The lesson has not been learned yet, it seems.

In Oto Hudec’s work “land” visitors are only allowed to pass through a wooden fence when they suit certain criteria. In front of the door a guard tells the visitors if they are allowed to enter or not. Behind the fence is a clean, white land with some houses and a model railway. 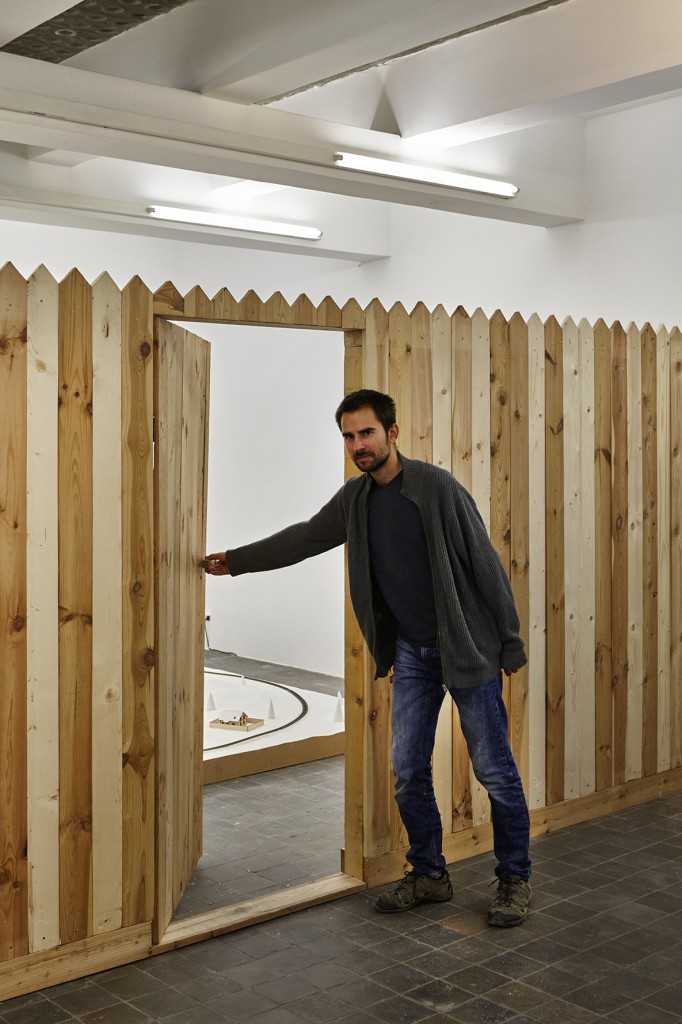 How do people react when they are welcome / not welcome to cross the border?

First of all, I am not present during the selection. I think it is better, that who is selecting isn’t the author himself which gives very different meaning to the work.

So I don’t know about the reactions of the people from the first hand. Most of the people I know who were not allowed to enter did not complain – they were also quite aware of the meaning of the work. Some of them returned to the exhibition in Bratislava and tried to enter again – as the rules are changing everyday, there is a big potential to enter once.. In some way, the experience of those, who did not enter is as valuable, as those who did and saw what is behind – the feeling of being denied to something creates stronger emotions and thoughts.

I did not hear any stories of angry reactions from the staff in Kunsthalle in Bratislava. Also, I think they were quite at ease in selecting people.They were even quite severe, when the rules were opened to their decision – as with dark/brown hair – they selected only those with really really dark hair.

On the other hand, In Berlin there seemed to be stronger reactions and also it was an unpleasant experience for a person selecting.

There is a certain aspect of psychological experimentation in the work – as in Zombardo prison experiment – if the “guards” will become more and more strict and cold over time..

What I think, is that people in Slovakia are more used to accept authorities – a command from a representative of an institution.

My work is mostly a commentary to the selection process  at the border and to the differentiation we make between refugees and economic migrants. I would like people to experience the situation of being at the border and the tension of not knowing if they will pass. I think what the migrants experience in front of the fence is more the stress of not knowing if they will pass than the craving to know what is behind it.

Of course, there is also a second moment – what the refugees find is often different from their dreams. But still it is a safe haven.

For those, who managed to pass there is still a surprise – the landscape behind it, although looking almost perfect, is actually boring and uniform, with a railway in a circle.

The romanian artist Dan Perjovschi exhibited his simple drawn posters in an installation at the exhibition in Bratislava. In Berlin he presented his take-away drawings, showing a house filled with commodities. The owner of the house opens the door to a man, which obiously asked for accomodation, but the owner answers: “Sorry, is full”. 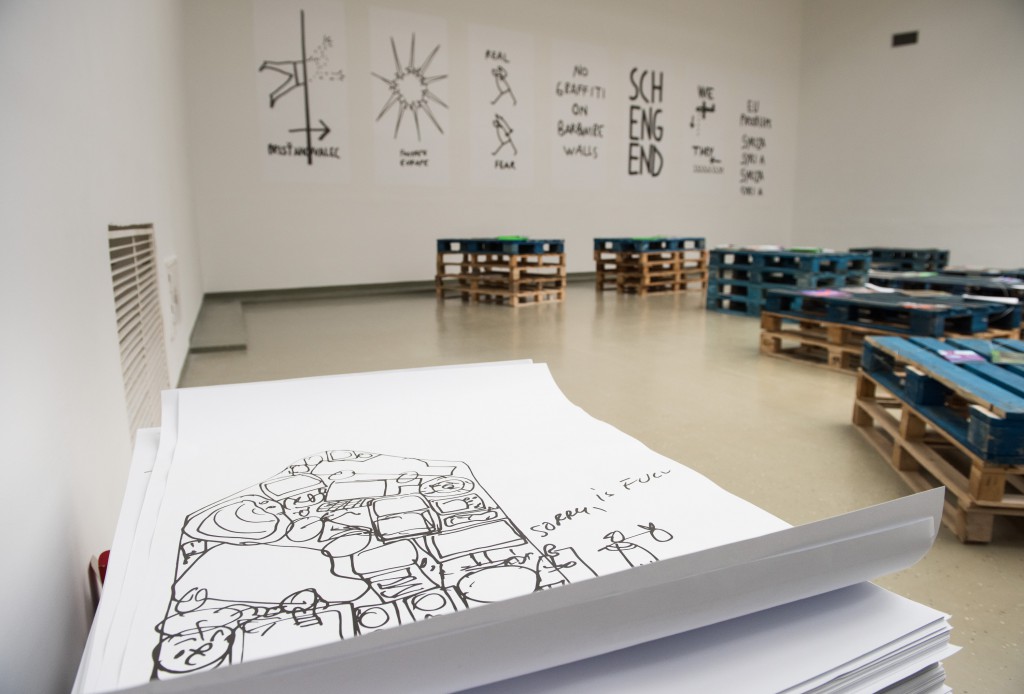 Is it your intention to focus on society’s problems in a playful way?

I use humour very seriously. I publish drawings in political magazines since the fall of dictatorship weekly. For me this are not cartoons but statements. My aim is to condense a complicate issue into few lines. Humour is there to make those lines understandable.

Have you made any personal experiences during the refugees crisis that inspired your artwork?

I work in the press. I was in the middle of news and analysis. But artists friends of mine were involved directly in Budapest. I follow the news about the flux of people, the erection of walls and the demonstrations of locals. All this generates drawing reactions.

Do you think because of being a consumer society and living in abundance we are losing the view, empathy and the interest in other peoples fate?

Yes we do, but some societies are less abundand than others. Sometime this “less” make people behave in a certain way. I was shocked by the reaction of former East Europe countries. They knew better. Their citizens were in the situation of evading their own countries. Romania have 4 million people working abroad.